With Selfridges currently offering out an appointment only method to buy the new Balenciaga sneaker, the ‘track’ it’s safe to say the Balenciaga sneaker hyperbole is still in full swing. The track sneaker, which Balenciaga see as their hopeful successor to the the king of the dad shoe the Triple S. The track which has a release date of September 3rd exclusively at Selfridges piggybacks onto the success of the aforementioned Triple S, continuing to ride the wave of the chunky sole whilst diving more into the realms of more technical fabrics and craftsmanship. These designs are a long way away from the sneaker offering under the Alexander Wang tenure just half a decade ago, here’s the evolution of the Balenciaga sneaker to the phenom that is it today.

As you can tell the word evolution is an apt word to describe the transition of the balenciaga sneaker. the low top, classic sneaker style silhouette was the main style of their men’s sneaker range back in 2011. The style which resembles that of the staple maison margiela g.a.t (german army trainer) with the running style cushioned sole whilst having a sleek and simple design. the incorporation of the suede again draws inspiration from the g.a.t style. the style shows how far men’s fashion and especially sneakers in general have developed from a taste and experimental perspective with balenciaga leading the charge. 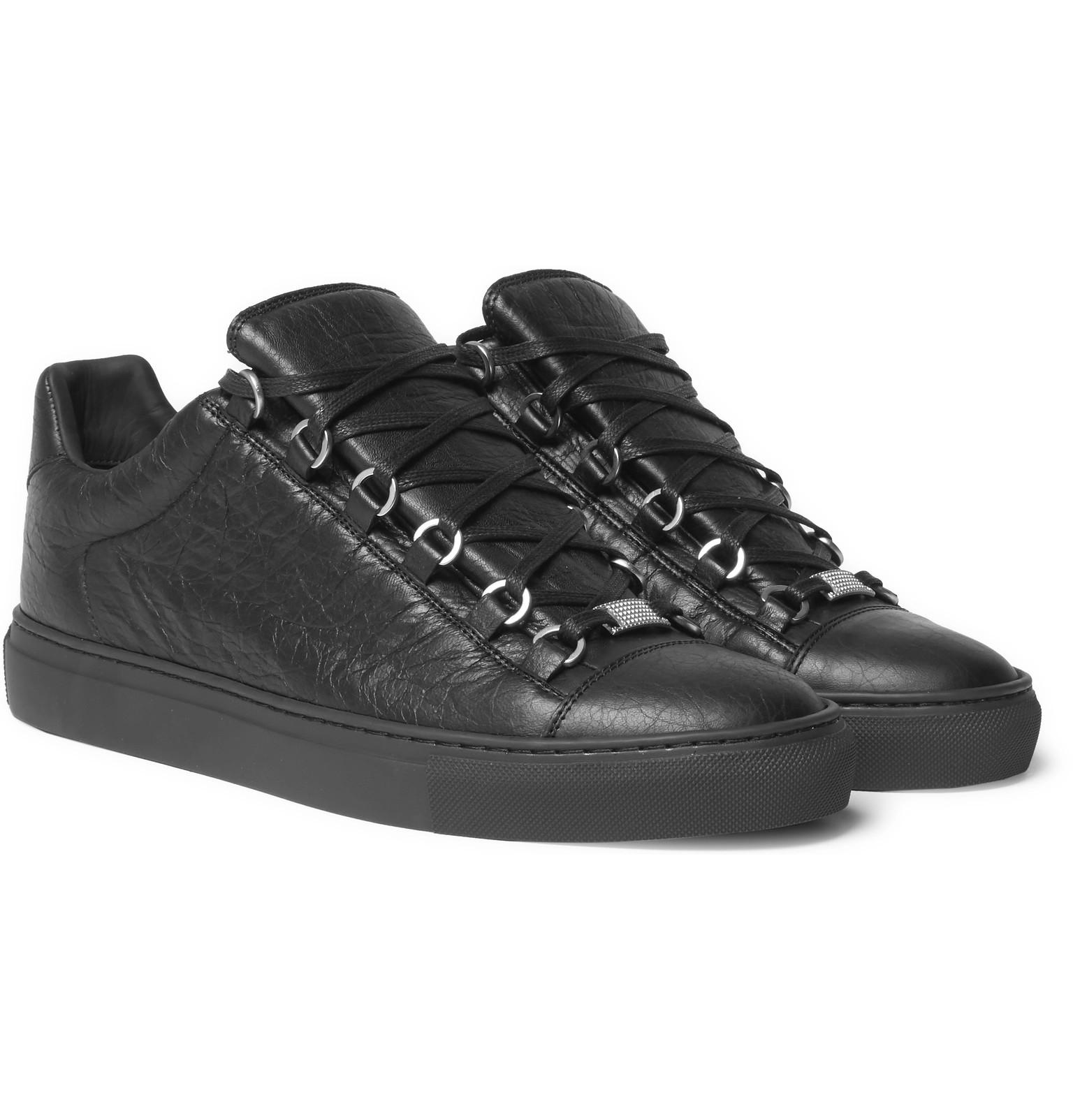 The earliest sneaker of theirs this decade to have an actual name attributed to it. as one of the last sneakers to come under Nicolas Ghesquière’s reign it made an extremely positive start selling out at several luxury retailers. gaining traction for moving in a more premium direction through the creased leather look whilst combining it with a hiking boot-esque sort of style, giving off a similar feel to a sneaker version the bally hiking boots of today. The style has maintained it’s position the mainstay of the balenciaga range for several years, but has obviously died down in recent times due to both being quite a basic silhouette which is difficult to manipulate to keep up with current trends along with the focus switching to the more niche and unique pieces balenciaga have cooked up.

After indulging in the more luxury oriented sneaker in the ‘arena’ the range expanded into a more tech and sportswear focus. releasing in the fw15 drop during the transition of Alexander Wang and Demna Gvasalia the sneaker named the ‘race runner’ was given the identity of a running sneaker, whilst not really suitable for running. The sleek silhouette with knitted front and an elastic strap gave a large nod to comfort which has only escalated over their future releases. This sneaker was the first sort of positive transition for Balenciaga into a gender fluid sneaker which both sexes could wear, so although not hitting the heights of the hype of the speed sock or triple s the race runner certainly laid the ground work for these styles to be achievable.

The first of the Balenciaga sneakers to really drive mainstream prominence to the brand in the Demna era. Combining the sportswear inspired race runner with general sportswear footwear trends (the Nike superfly springs to mind) and his previous experience with fockwear uppers with vetements Demna fused them all together to perfection. As its namesake says the sneaker fundamentally is a sock moulded into a geometric sneaker sole, creating not only Balenciaga’s but potentially one of the sleekest sneakers to date period. The comfort is second to none being ridiculously lightweight and extremely easy to wear whilst the blacked out minimalist design allows the sneaker to be worn with both jeans and sweats. The reaction was insane, selling out everywhere often in a matter of days even after restock. This has led to a multiple colour ways, exclusive collaborations with the prestigious luxury menswear retailer Mr Porter and of course literally everyone from Givenchy to Zara ripping off the design. 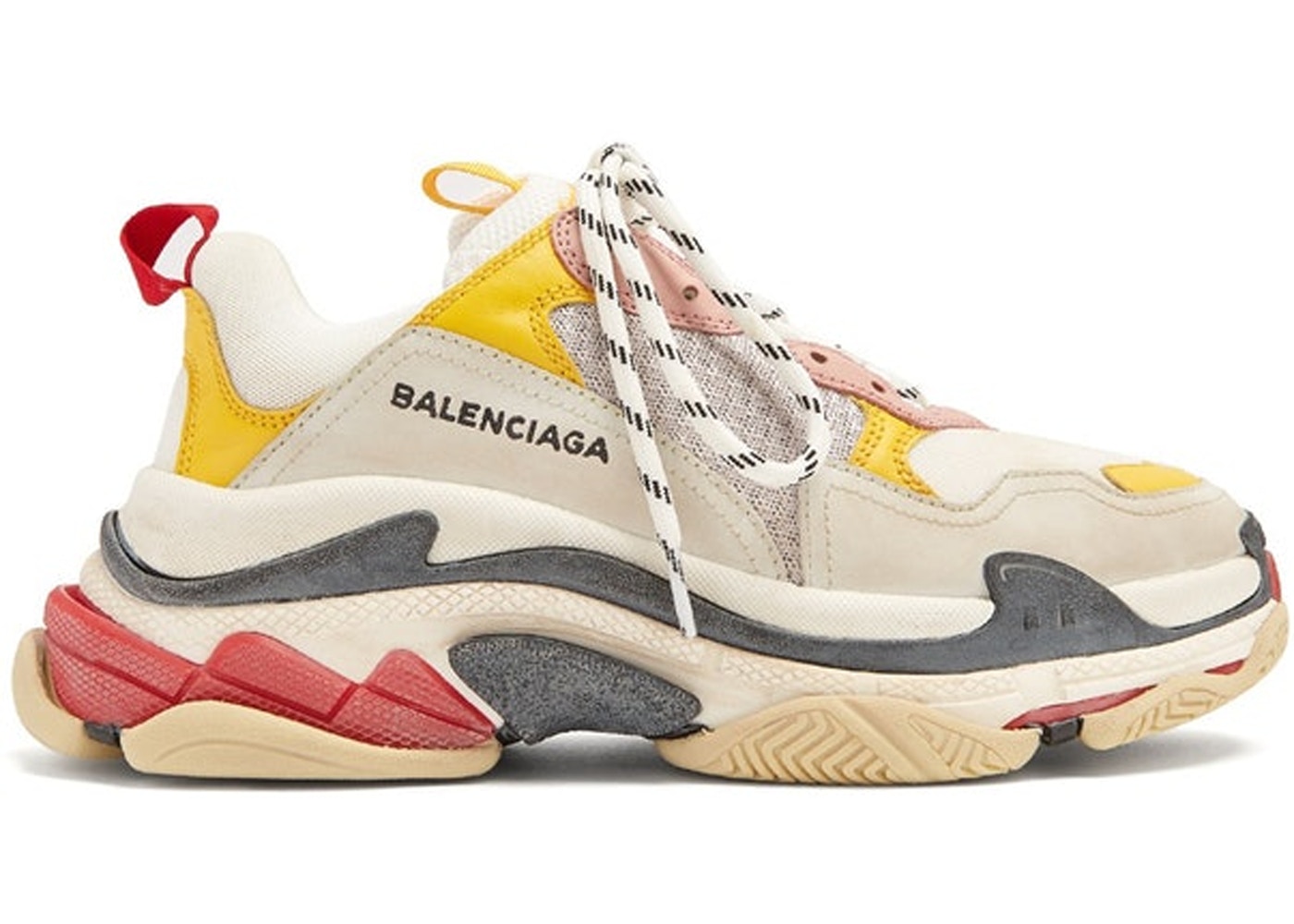 Hot on the heels of the speed sock Demna went in the complete opposite direction in the form the of the Triple S, aptly named due to having three soles. Taking the reign of the dad sneaker surge there was huge publicity around the sneaker as it started to dictate the more statement-piece extreme trends of today, further killing off the scandi-esque hype surrounding the likes of common projects and beige trousers.once again focused across comfort but through a more heavy-duty and high spec material the styles came pre-distressed with high quality leather, embroidered with the shoe size on the toe tip. the style continues to be prominent in the sneaker scene and in balenciaga’s extreme growth  with several colour ways and new array of laces dropping in the fw18 run.

There are no users currently online